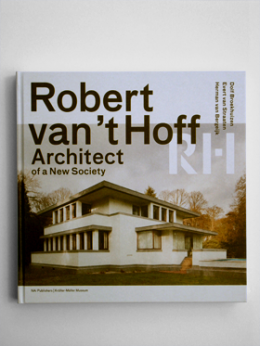 Book:
Architect and anarchist Robert van ’t Hoff (1887-1979) created innovative designs for houses at the beginning of the twentieth century; Verloop Summer House and Villa Henny are the most striking. In this first monograph about this Dutch moderist architect, all his projects are described and richly illustrated; furthermore, Van ’t Hoff’s most important writings have been included. This publication accompanied the exhibition ‘All or Nothing’  about Robert van ’t Hoff in the Kroller-Muller Museum in Otterlo (april-august 2010)

Exhibition:
The comprehensive exhibition about the Dutch architect Rob van ’t Hoff (1887 – 1973) provides an overview of his oeuvre and his personal aspirations, based on important themes in his work. His design for Villa Henny, the ‘concrete villa’ built in 1915-19, was one of the earliest examples of het Nieuwe Bouwen or modernist architecture, and it is referred to in numerous surveys as a revolutionary contribution to the renewal of Dutch architecture. He was also a prominent member of the Dutch avant-garde movement De Stijl. What is not so well known is Van ’t Hoff’s striving for a more engaged society by means of contemporary architecture. The publication and exhibition present this theme as an integral part of his work. The exhibition also presents a great deal of material that has been virtually unknown until now, like a three-seater sofa from 1918, swimming trunks and a specially made wooden bookcase containing the architect’s collection of social-utopian books. A completely unknown interior of the architect’s study from his house will be exhibited for the first time.

review:
JSAH: ‘… Robert van ‘t Hoff (1887-1979), a social radical of feminist and communist sympathies, shunned the spotlight, husbanded his production, and sought to reform society through political action as well as architecture.’ Helen Searing in: Journal of the Society of Architectural Historians, Volume 70, number 2, june 2011, pp. 269-271

Blueprint: ‘However, as the exhibition makes abundantly clear, Van ‘t Hoff’s aspirations for social change through architecture went far beyond what Van Doesburg would countenance and he split from De Stijl in 1919.’ Michael White, in: Blueprint, september 2010, p. 79

The publication was made possible through the financial support of the Netherlands Architecture Fund, Rotterdam, the Van Eesteren-Fluck and Van Lohuizen Stichting, the Stichting Harten Fonds, The Hague