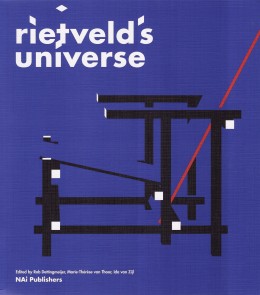 Dutch architect and furniture maker Gerrit Th. Rietveld (Utrecht 1888-1964) is one of the most celebrated designers of the twentieth century. He achieved worldwide fame with his Red-Blue Chair and the Schroder House. In the vast quantity of literature about Rietveld’s designs, relatively little attention is paid to his writing. Dolf Broekhuizen describes in his essay in ‘Rietveld’s Universe’ the early development of Rietveld’s ideas. He takes Rietveld’s words and writings seriously and relates them to his oeuvre.

bookreview
‘Published alongside the exhibition, the book Rietveld’s Universe explores his career and critical reception in a dozen essays. It’s a valuable collection, which ranges from the cultural life of Rietveld’s hometown Utrecht to the way he detailed a corner, and out of it another Rietveld emerges: not just the standard bearer for De Stijl but a prescient environmentalist.’ Andrew Mead, in: The Architectural Review, december 2010, p. 110-111

review of exhibition:
‘A major exhibition at the Centraal Museum here is making an exceptional effort to explore and expose the creative energy of the pioneering modern Dutch architect Gerrit Rietveld.’ Colin Amery, in: The Wall Street Journal, januari 11, 2011